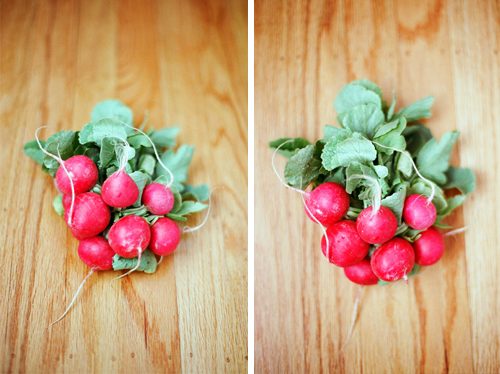 Why, hello.
Yes, I'm still alive. It's been a whirlwind around here! My trip to Utah was successful (although I was hoping to sneak in more naps!) and now I'm just waiting for all the film to come back... so, in the meantime let's talk about food!


I've been super lazy about my food photos and recipes lately. It started with the move. I wasn't even cooking for a few weeks and then it was more like survival-mode cooking than anything else. Then it was dark when we ate dinner. Now I have a toddler pulling at my pant legs, whining because I won't let him stick his hand in the boiling pot of water. Oh, it's so tough being a toddler.

My goal is to get back into my food photos in the next few weeks. I'm not making any promises, but here's to hoping. Maybe a few phone photos will sneak in...

Until then, enjoy these radishes!
Posted by Jackie Norris at 12:01 AM